PERSEVERANCE LANDS ON THE RED PLANET

Mars Perseverance, the rover launched by the United States National Aeronautics and Space Administration (NASA) on a mission to Mars has successfully landed on Mars on February18, 2021. The rover which was launched on July 30, 2020 from Cape Canaveral Air Force Station, Florida, has a length of 3m, width of 2.7m, height of 2.2m and weighs 1,250kg. Its mission is to investigate if life existed on Mars, and also test new technology that will be beneficial to future robotic and human exploration of Mars. 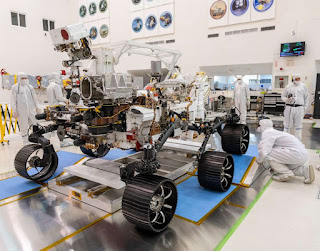 Perseverance being designed by scientists

Perseverance Rover launched the same month as Hope Craft launched by the United States Emirates and China’s Tianwen-1. Of the three space missions, the US’s rover is the most innovative as it comes with the first made-for-Mars helicopter: Ingenuity, which will test flight on another planet, in an atmosphere that is thinner than the Earth’s. 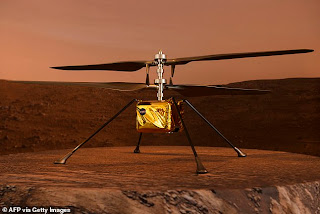 The journey from Earth took almost seven months and the rover touched down on the surface of Mars at 8:55m GMT, to the cheers and applause from the scientists monitoring its progress at NASA. According to the British Broadcasting Corporation (BBC), the rover will collect samples of rock and soil, encase them in tubes, and leave them on the planet’s surface to be returned to Earth at a future date. Perseverance will also study the Red Planet’s geology and test how astronauts on future Mars missions could produce oxygen from CO2 in the atmosphere. 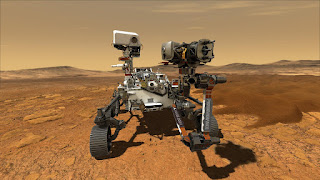 A number of STEM women helped to make Perseverance’s landing very successful. These women are Systems Engineers, Geologists, Information Scientists, Planetary Protection Engineers, Robotics Technologists, Software Engineers ,among other STEM professions. Indeed, women can be anything they want to be – elegant in stilettos and confident in steel toes. 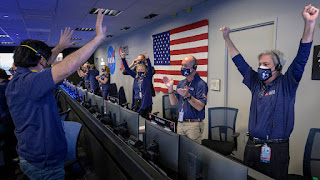 ‘Yeah we did it!’ NASA scientists celebrate as Perseverance lands successfully on Mars

PERSEVERANCE LANDS ON THE RED PLANET

By The STEM Belle May 9, 2022
Stilettos and steel toes blog

THE FIRST EVER FEMALE AND COLOURED VPOTUS THE WORLD EVER HAD

FROM INDIA TO SPACE

By The STEM Belle May 8, 2022
Stilettos and steel toes blog

NOI – The Bespectacled Woman in the African Attire

By The STEM Belle March 21, 2021
Stilettos and steel toes blog

STEM Belles At The Fore-Front Of The Fight Against COVID-19; Celebrating The International Day For Women And Girls In Science, 2021

This website uses cookies to improve your experience while you navigate through the website. Out of these, the cookies that are categorized as necessary are stored on your browser as they are essential for the working of basic functionalities of the website. We also use third-party cookies that help us analyze and understand how you use this website. These cookies will be stored in your browser only with your consent. You also have the option to opt-out of these cookies. But opting out of some of these cookies may affect your browsing experience.
Necessary Always Enabled
Necessary cookies are absolutely essential for the website to function properly. These cookies ensure basic functionalities and security features of the website, anonymously.
Functional
Functional cookies help to perform certain functionalities like sharing the content of the website on social media platforms, collect feedbacks, and other third-party features.
Performance
Performance cookies are used to understand and analyze the key performance indexes of the website which helps in delivering a better user experience for the visitors.
Analytics
Analytical cookies are used to understand how visitors interact with the website. These cookies help provide information on metrics the number of visitors, bounce rate, traffic source, etc.
Advertisement
Advertisement cookies are used to provide visitors with relevant ads and marketing campaigns. These cookies track visitors across websites and collect information to provide customized ads.
Others
Other uncategorized cookies are those that are being analyzed and have not been classified into a category as yet.
SAVE & ACCEPT
Have any question? Chat us up now
Start a Conversation
Hi! Click one of our member below to chat on Whatsapp
The team typically replies in a few minutes.
The STEM Belle
ADMIN